The first section of the cli is the run section, you can run your own python scripts of your project or the cli solutions of your modules.

This are the available options on the run command, you can run without a specific file that will take run.py ass the running file to load

Or specifying a file by adding the file path and name after the run statement.

Taking this example into consideration 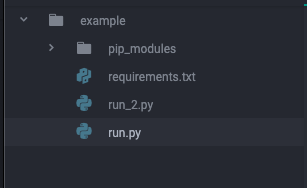 Where requirements.txt file has this values

And in the other hand run.py and run_2.py has this

The run.py its setted by default to the mmp run command but you can send a specific one like this.

In the case that you install a module that has some cli commands that you want to run, you can use the pass command that its implemented on mmp. On this example we are using a orm named orator